The Jackson report was published in January 2010. Consultations took place between November 2010 and February 2011 and in March 2011 the Government announced major changes to civil litigation in general, and personal injury claims in particular including to After the Event Insurance. Since then the Government has announced a number of other ad hoc changes.

The proposals are wide-ranging and go well beyond the original Jackson recommendations. As at March 2013 the key proposals in relation to claimants in personal injury claims are:

ATE Insurance: Any After The Event Insurance policy purchased after 1 April 2013 will not be recoverable by the claimant from the defendant.

Success Fee: If a CFA is signed after the 1 April 2013, the claimant cannot recover any success fee which he has agreed to pay his solicitor.

Damages: If the CFA is signed after the 31st March 2013, claimants will receive an extra 10% general damages.

QOCS: Qualified One-way Costs Shifting (“QOCS”) will apply to all CFAs signed after the 31st March 2013. An unsuccessful claimant will not have to pay the defendant costs unless:

In many of the above situations, the costs which the claimant must pay to the defendant are limited to the amount of damages awarded to the claimant, but in some cases they are not limited. Apart from fundamental dishonesty, after the 1st April, Box Legal’s Claimsafe After the Event Insurance policy will cover all of the above adverse costs risks and the claimant’s own disbursements.

Referral Fees: From the 1 April 2013 onwards it will be a breach of the Code of Conduct for a solicitor to pay a referral fee, but it remains permissible for a solicitor to pay a referrer a reasonable fee for the work it has carried out. The onus will be on the solicitor to be able to demonstrate to the SRA that it has paid any referrer a reasonable hourly rate for the numbers of hours of work actually done. It will also be permissible to pay for marketing if the payment is not linked to the number of cases received.

Small Claims Track: The Ministry of Justice has announced that the small claims track limit will not be raised above £1,000 for the time being. This decision is welcome news for claimants and claimant solicitors.

The Portal: The portal currently applies to RTA claims worth up to £10,000. At the end of July 2013 the RTA portal scheme is being extended to all RTA, employer and public liability personal injury claims worth up to £25,000.  Under Paragraphs 1.1 (14) and 2.1 of the EL/PL Pre-action Protocol published by the CPRC, this would also include Industrial Disease claims. 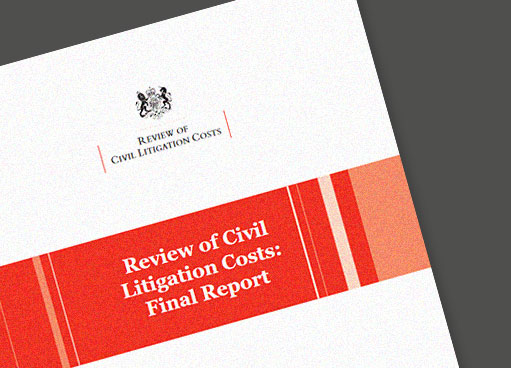 Review Of Civil Litigation Costs
In November 2008, the Master of the Rolls, Sir Anthony Clarke, commissioned Lord Justice Jackson to undertake a “fundamental review” of the costs of civil litigation, followed by the production of a set of recommendations designed to promote access to justice at proportionate cost. The review commenced at the start of 2009 and was presented to the Lord Chancellor, Jack Straw in January 2010. The exercise led to a number of fundamental changes across the civil litigation landscape. You can view the 'Review of Civil Litigation Costs: Final Report' by clicking on the 'Read more' button below (External site - www.judiciary.uk)